The trip was short, but the fun was endless at lululemon’s third edition of the SeaWheeze half marathon.  I’ve been a lulu fan since the beginning and could write endless blog posts just on this topic alone. If you’ve ever owned a piece of their gear, you can probably agree that the stuff can make life in the gym, on the road, or at the coffee shop better.

My friend and running coach, Michele, lives in Seattle and I had mentioned to her that we should do a girls’ trip to run this race.  Michele was quickly on board but stated that she would have to run for fun as she would be in recovery from a 50 miler.  Um… okay.  I understand.

Originally, I thought that I would use my Wharf to Wharf training as a springboard for a kick butt race, but my summer bad luck did not let that plan play out.  So, like Michele, this was a race for pure fun… and a smidge of pace pushing.

After a flight into Seattle, Michele and I drove across the border into Canada on Friday.  We got to the expo a bit later than expected as there was some traffic just past customs.  The expo closed at 8:00 and we got there around 7:15.  Fortunately for us, there wasn’t much of a line and we got right in and right out.  At the expo, we were given a timing chip, a cute messenger bag (not of the highest quality, but cute and I’ll find a travel purpose for it I’m sure), a water bottle, and a plastic bracelet that served as our ticket to the Sunset Festival post run.  Oddly, the race didn’t have bib numbers.  I kind of liked this, but the former race director in me wondered how many people would bandit the race.

Lulu teased us by showing pictures of the Showcase Store… take a look… isn’t it lovely? 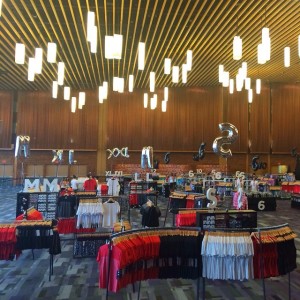 Sadly, you had to get in line at 4:30 AM in order to get any goods.  Considering how late we got to the store, there wasn’t much left unless you can wear doll sized clothing, or you wanted to shop for your man (and he wears Paul Bunyan sized clothing).  Lots of race participants were really upset that the doors were open to the public and purchasers could buy 15 items each.  If you didn’t get to make a purchase, you can now go to eBay and pay double or triple the cost for an item.  It sounds like this has been a problem all three years so I’m crossing my fingers that lulu will listen and make some changes for future events.

After getting race packets, Michele and I headed out for a lovely dinner and some pre-race vino at Italian Kitchen.  Our meal was delicious and just the right amount for race day.  By the time dinner was all said and done, we headed back to the hotel in order to get some shut-eye before the 7:00 AM start.

Race morning, the logistics to get to the event were easy peasy.  We were just blocks from the start.  Once at the start, corrals were clearly marked and there were “Pace Beavers” holding big signs so runners knew where to jump in.  I gave Michele a good luck cheer and went to line up with the 1:40 pacers.  After the singing of the Canadian National Anthem we were off. 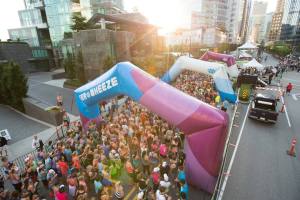 My intentions for the race was to run a 7:30 pace for most of the run.  I figured that sticking with the 1:40 pace group would be a good start… wrong.  The first mile was a 6:54 and the next two were under 7:10.  I decided to back off just a little as I didn’t have the training to sustain such fast paces.  This is the point that the race became a lot more fun.  I took the time to take in the scenes and make some friends along the way.  As for the course, the race starts and finishes in front of the Vancouver Convention Center.  It weaves along the coast and heads thru the city blocks until Burrard Street.  Runners get to cross the Burrard Street bridge which seemed to be the biggest climb on the course.  This part was fun as you could see the leaders making their way back on the course.  After crossing the bridge, there is a quick out/back past lululemon’s headquarters, and then back over the bridge… which means the biggest climb comes again.  While I am calling it a climb, it really wasn’t, but the pacer made a big deal about it so I went with it.  In California, where people call an actual mountain, “The Hill,” my idea of climbing is slightly altered. 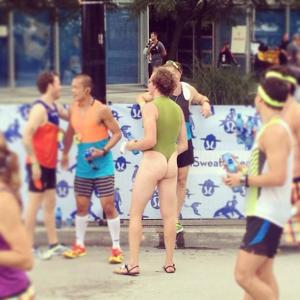 Some things I will never understand, but this dude was out in front and I got quite the view while on the bridge. Kudos to him for being so comfortable in something that looked so uncomfortable. 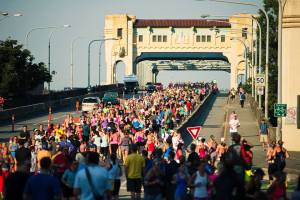 Burrard St Bridge… I’m not a fan of bridges, but this was pretty.

The return trip on the bridge marks the 10k portion of the race.  Shortly after the bridge, runners are directed towards the magnificent Vancouver Seawall.  The seawall goes around Stanley Park (the largest park in North America… I didn’t google this.  Just took the word of the hotel guy).  When I visited Vancouver in July, I loved running in this park, and this time around was no exception.  The only bad part of this piece of the course is that there was a ton of energy in all the miles prior and the seawall was pretty quiet.  The volunteers at the aide stations did a nice job of cheering, and there were a few groups out there to cheer as well.

It was at this point in the race that I made the most friends.  In fact, I started talking to a guy only to find out that he grew up in the town next to my husband and they were actually really good friends in high school.  What a small world!!!  The two miles I spent running with Ian were my slowest miles (no jab at Ian’s speed… the guy just did an Ironman four weeks prior), but these were the BEST miles of the course.  I love chance meetings like that.  Finally, Ian told me he was finished and that I should carry on.  Since I was close to the finish, I pushed on through for a finish time of 1:37:34 (7:23 pace).  I was pretty happy with this result and felt like it was a good place to be going into training for the California International Marathon… until… 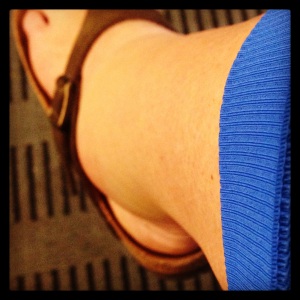 The summer klutz award goes to…. ME!

There was a post-race party in Vancouver that looked like lots of fun, but Michele and I had a very special soccer game to get to so we made the trek across the border after a shower, lovely lunch and celebration gelato. After a long day running, playing and going to the soccer game I tried to carry too many things down the stairs and took a tumble.

With Seawheeze barely in the rearview mirror, lululemon just announced that registration for the 2015 event will be September 10th.  I would definitely sign up for this race again… want to do it with me?  You can find sign up information here:  www.seawheeze.com

One thought on “Lululemon SeaWheeze Half Marathon – Race Recap”