In late June of 2014, I had big ambitions in regards to my blog.  Typically, I’m a pretty prompt person – Hello Virgo – but what can I say… life got complicated.  Each week, I had posts in mind but I just kept putting it off or would find some other task to tackle instead.  After a bit, I thought, “Ugh… I should just quit because it has been so long since my last post.”  However, I do enjoy sharing this and that with those that come to my classes, are seeking some run love, are daring enough to try a recipe that comes across this blog – let’s face it… my husband and I have differing opinions on food so I like when you all agree with me – and finally, is there ever enough input in the fashion or beauty department… never.  Now I am at a crossroads and have decided that it’s onward and upward.  The whole purpose of this post is to simply, catch up.  Here goes…

In the Laps department, my mantra has been “Comeback, not setback.”  There really is great truth to that.  When I posted last, I had just been given the green light to start running again.  It. Was. Awful.  Seriously, running is hard!  But… it is a lifesaver.  Coming back from an injury and another health issue I was at one of the lowest points in both my emotional and physical state.  Running, while it was slow and painful gave me a sense that with each mile all would be okay.  It’s true.  The more I ran, the better it got and the better I felt. On the last day of January, I had hit the 6 mile mark (the doctors said I would be able to run three).  February was another setback month, but somehow, I finished the last day of the month with 7 miles.  And then in March… the fire was started.  For most of March, I just focused on running 5 days per week.  Just for the fun of it (and because it is put on by a super rad lady), I entered the She Is Beautiful 10k.  There wasn’t a race plan for this 10k, but I had high hopes to run under 8 minute pace.   Honestly… my Garmin didn’t track but a few miles at that pace since August so I thought it was a good place to start.   Somehow or another, I averaged a 7:03 pace.  I’d like to say I didn’t know where it came from, but that wouldn’t be true.  This is one of the first times that I ran with only my heart.  When I finished the run, I had tears in my eyes.  I knew that I was on my way back, but this time around, I vowed to not forget that running is fun, it makes me happy, and while healthy competition is to never be overlooked, letting the competitive balance tilt too much will make your running outlook suffer… a lot. 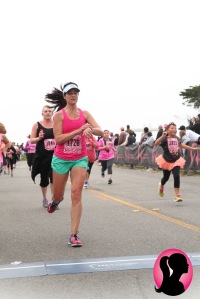 Check out the smile on the face of the cutie in the tutu!!!

After SIB, I called my running coach and told her I was ready to train.  For what, I wasn’t completely sure, but I was ready to start doing something.  Between then and now, I paced my friend and coach, Michele, at the Miwok 100k (Ultra runners are BAD ASS), ran the Surfer’s Path Half Marathon for fun… in fact I was in such a fun zone that my friends and I started the race five minutes late cause I forgot my bib… really… who does that??? 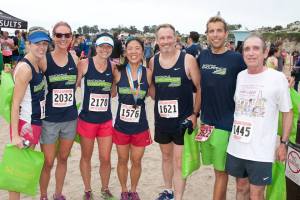 SCE after the Surfer’s Path Half Marathon. Photo courtesy of Nancy Z.

In June I ran the Tahoe Relays with Santa Cruz Endurance which leads me to the now.  I’d been increasing my mileage and as I had witnessed my paces dropping I started to toy with the idea of a marathon.  Some of my friends are going to Boston for the first time ever and I thought I might want to go for support.  Knowing Boston qualifiers last for two years, I figured my 2014 qualifier at Boston would get me into the 2016 Boston, but it doesn’t since the window is September to September.  So… I needed a BQ and have now set my sights on getting one at the Santa Rosa Marathon on August 23rd.  In Tahoe, I ran my leg of the relay and added on to get to 18 miles.  I told myself if I could run in the altitude – that far – with part of it at race effort – that I would sign up for the marathon… and I did.  Stayed tuned for the rest of the story…

Since drifting away from the blog, I wish I could say that I’d been spending my time scouring cookbooks and reading food magazines cover to cover, but I have been super, duper lazy.  This is another reason that I wanted to get back to my blog.  I love discovering new recipes, trying them out and sharing them with others.  When life gets complicated, exerting extra effort for things like grocery shopping and cleaning up messes becomes even more daunting.  Thanks to some advice from my boss, I started to go to Dream Dinners. I have to say… it’s pretty awesome.  Check out their site for some details, and really, I promise I will write a post about it after the next time I go (which will be in September).  Over the course of the summer, I have really started to look at our diet and have started up the grill and have ventured into cookbook land once again.  I guess marathon training inspires one to eat some healthier meals.

Other than that, my husband and I have stayed busy with a trip to the Midwest for family fun, taking advantage of the beaches here at home, and discovering different places to eat around town.  We also got on an organizing kick and now have some pretty cleaned out closets.  In fact, I took my husband’s drill and with a little help from The Container Store, I have a new pantry.  Guess what’s in that new pantry?  Finally… I purchased emergency supply kits because my mother-in-law and mother frequently remind me that the whole West Coast is bound to be destroyed by an earthquake any day now. 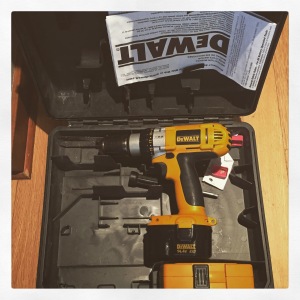 With much uneasiness, my husband handed the drill over. It’s been 3 weeks and the shelves are still holding strong.

Do you remember that I said I was training for a marathon?  Right.  As a result, I’ve spent a lot of time in my running clothing.  Fortunately for me, Oiselle has had some super cute running attire and I now seem to have a pair of distance shorts for each day of the week.  It’s been a warm summer in Santa Cruz so I’m most often running with my sports bra.  Next weekend, I will be in Seattle and hope to go to the one and only Oiselle store.  I think this shirt would be an appropriate purchase.  Speaking of this company… I’ve been a superfan for a long time.  Recently, they opened up spots on their team and I (much to my surprise cause I was finishing up a 22 miler when the window opened) got a spot.  I’m pretty excited to get to know the other ladies of The Flock.  1,2,3 Oiselle Volée!!!

When I’m not wearing running gear, I’ve been obsessing over boyfriend jeans, tees and heels.  It’s been a pretty laid back summer style wise and I’m just now starting to feel like it’s time to add some fun to my fall wardrobe.  I sound like a broken record, but stay tuned… 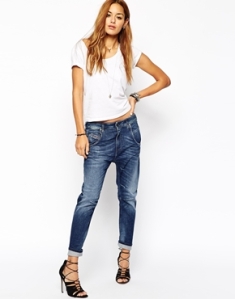 Pretty much me every evening (and day) this summer. Thanks asos for the picture.

One thing that has changed my life however, is the Sarah Potempa Beachwaver.  Seriously… I have super thick and heavy hair so it best lends itself to a ponytail unless I have tons of product and endless time to attempt a style… that will last for maybe the walk to the car.  That is until this little curling iron caught my attention.  Seriously, I can curl my whole head into some sexy waves in about 15 minutes tops.  Even better, I can do so with very little product.  After getting out of the shower I put a bit of Kevin Murphy Smooth Again in my hair.  After it dries, I spray it with a bit of Style Sexy Hair 450 Headset and then I go to town with my curling iron. I’d like to take all the credit when I get compliments on my hair, but I can’t… this iron was a game changer.

Thanks for following along during this super long post.  I am really motivated to post away and not let the craziness of life keep me from taking time to do the things I enjoy.

Hoping your week is full of joy and the chance to do something extraordinary!

One thought on “Catching Up….”